Camerata The Queen of the Nile

Peerless Queen, fearsome leader, and an amorous lover - Cleopatra is depicted throughout history as a woman possessing legendary intelligence and enviable beauty.

The Queen of the Nile features showpiece Baroque arias by Handel inspired by the enigmatic Egyptian monarch, alongside music by his contemporaries that will surprise and delight.

Gaining praise from critics world-wide for her ‘vivacity and clarity’, the luxurious voice of soprano Sofia Troncoso will be on full display. Sofia will feature in two arias from Handel’s Giulio Cesare, including the sublime Piangero, before the evening finishes with a burst of vocal pyrotechnics with music from Vivaldi’s opera Il Tigrane, inspired by the other Cleopatra, the Queen of Armenia.

Performing without a conductor, Camerata – Queensland’s Chamber Orchestra celebrate an environment where all musicians take full ownership of their artform in the spirit of chamber music. Demonstrated in Heinrich Biber’s colourful and eccentric Battalia is their taste for flair, with virtuosity in full flight as Artistic Director Brendan Joyce takes a central role in in Pisendel’s Violin Concerto in D major.

Queen of the Nile was originally presented by Musica Viva Australia in association with Camerata. 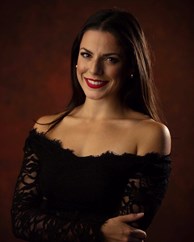 Sofia Troncoso is an American soprano of South American descent‚ who holds an Exceptional Talent Visa allowing her to work freely in the UK. Most recent roles include Papagena and Pamina The Magic Flute (Scottish Opera) Adele Die Fledermaus with Diva Opera and Poppea L’incoronazione di Poppea at Longborough Opera Festival‚ as well as covering Cleopatra Giulio Cesare with Bury Court Opera and concert appearances with Xi’an Symphony Orchestra in China. Sofia was an Emerging Artist for Scottish Opera in 2019-20. Having found herself in Australia during the Covid period, she now finds herself working there regulary with such companies as Opera Queensland, where her immediate plans include Susanna Le Nozze di Figaro, Pinchut Opera and several major orchestras.

Sofia began her study with Priscilla Bagley at the Dramatic Institute of Vocal Arts‚ Inc. Later, studying under Sunny Joy Langton‚ she gained an Honors degree from Northwestern University. During this period, Sofia was selected for the Castleton Artist Training Seminar at Lorin Maazel’s Castleton Music Festival where she participated in the recitals‚ concerts‚ opera scenes‚ and mainstage productions: Il Tabarro‚ La Boheme‚ Beggar’s Opera‚ L’enfant et les sortilèges‚ Suor Angelica‚ Carmen and Porgy & Bess. Moving to Europe, she graduated with Distinction from Royal Academy of Music, where she studied with Ryland Davies and James Baillieu, and where roles studied included Cendrillon and Suor Angelica. In 2016-2017 Sofia was a Young Artist at the National Opera Studio and for Les Azuriales Opera where she sang Nanetta Falstaff and won the Karaviotis Prize and the Salter Prize.

Upon leaving NOS in 2017 Sofia sang Frasquita Carmen with Ormond Opera‚ Vixen Cunning Little Vixen at Grimeborn Festival and Sister Genioveffa Suor Angelica with Lunchbreak Opera. Highlights of 2016 included a tour with Scottish Opera The Mikado‚ Susanna The Marriage of Figaro with Opera24 at the Grimeborn Festival.

Sofia is an accomplished recital and concert singer‚ singing major works such as Bach‚ Beethoven‚ Hadyn‚ Mozart‚ Mahler etc. In recital she has showcased music in an array of languages and styles‚ her 2017 highlight being Stop all the Clocks: a multimedia cabaret with Shadow Opera.

Performing without a conductor, Camerata’s Artistic Associates and their guests proudly take full ownership of their music-making in the spirit of chamber music to form a thriving, refreshing and acclaimed voice to empower artists, inspire audiences, and enrich communities through music. Under Artistic Director Brendan Joyce, the group is Company-in-Residence at Queensland Performing Arts Centre and undertakes an annual regional Queensland tour and subscription concert season in both Brisbane and Toowoomba.

As Artistic Associates, players contribute to the strategic direction of Camerata, are integral to the process of programming the season of works and provide performance and training opportunities for the next generation of Queensland artists through the Upbeat program.

With a reputation for innovation and interesting and adventurous programming, the ensemble is extremely flexible in its repertoire and thrives in collaborations with artists from all art forms.

Camerata employs over 130 artists across 50 concerts each year, reaching an annual audience of 52,000. In 2020, Camerata reached an online audience of over 1,000,000 through 5@5 with Camerata and other digital programs in response to COVID-19. Camerata is committed to enriching communities with its annual regional Queensland tour which includes the commissioning of a new Australian work, free public performances, education engagements and workshops with local schools and students and visits to residents in aged care facilities

Duration: 2hrs, including a 20 minute interval (subject to change)

If you require mobility assistance please contact Redland Performing Arts Centre on 3829 8131 so that we can accommodate your needs. Further information can also be found on the 'Access and Facilities' page.

Parental guidance recommended to determine suitability for your child

$5 by phone and $6 online per transaction

Monday – Friday 9am to 4pm, and 1 hour prior to performances

For Early Bird Tickets book before midnight on 24 October. After this date Adults $45 and Snrs/Pens $40.

The Celebration of Swing